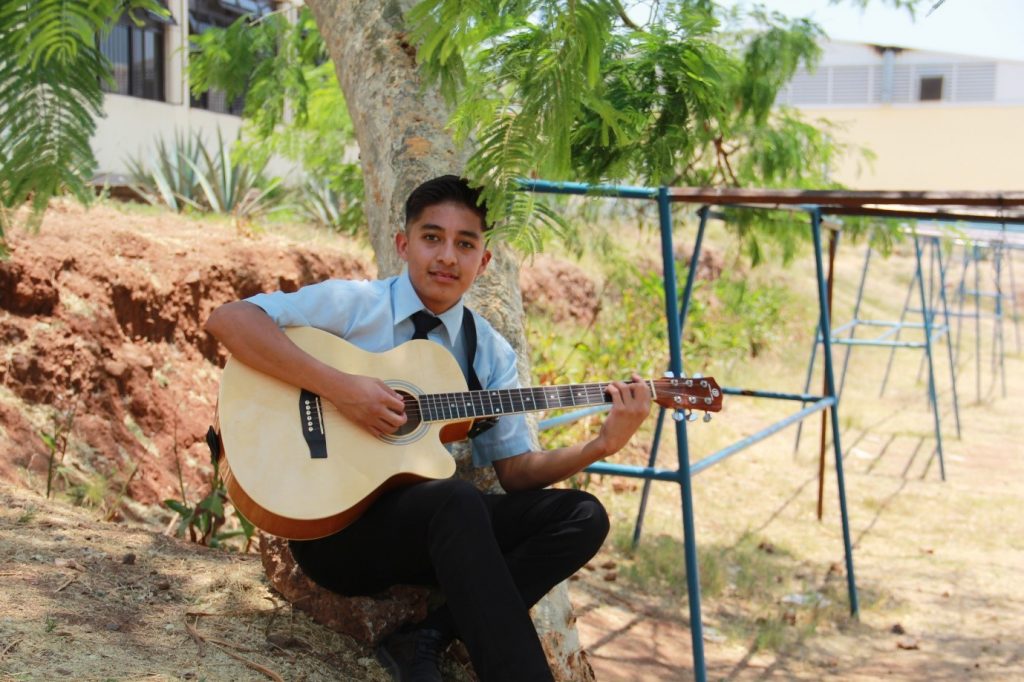 Irving playing his guitar at school

Irving is from Oaxaca in Mexico. He has three brothers and he lived with his parents and his aunt.

His parents worked hard to ensure Irvin had enough to eat but without education little work was available to them; the children were often hungry.  Irvin often worked alongside his family labouring in fields to raise money. On returning home late one day he says “I noticed my parents and my aunt were exhausted that it was difficult for them to return home, there I realized the great effort they made every day for us, to see us happy”.

Irvin tried to attend school but the quality of the teaching was poor and there were few teachers available to provide anything other than a basic primary education. His future looked bleak.

Everything changed when he was offered a place at the Sisters of Mary school in Guadalajara and with the support of his parents he joined the school and is part of the San Francisco family.

Irving playing his guitar with his family friend at school

When he arrived at school his biggest challenges were that he had to be strong being away from his family. He didn’t know anyone, and had to get used to a schedule. The school taught him to value things and educated him. Thanks to the Sisters he learned to work with people he didn’t even know and learn things that would help him in job opportunities later in life.

He says “I’m so grateful for the Sisters of Mary. My plans are to go out to work, be a good man and support my family who has always supported me. My father once told me: “Make each day a little better than before”.

He is currently in his last year of high school; he considers that the most important thing with his classmates is teamwork and the support they give each other by having similar characteristics and backgrounds. His favourite hobby is learning new things, music and playing sports and his dream is to give his parents a better life as they always tried to give him.

He says “Thank you, WVC supporters for making it possible not only for me but also for several young people to have a better future and to make a difference in this world.”